Since the signing of the Moana Taka Partnership in March 2018, the China Navigation Company has shipped approximately 686 tonnes of waste from Pacific island countries and territories for treatment and recycling in suitable ports in the Asia-Pacific region.

The China Navigation Company carries out the shipments free of charge to facilitate waste management in Pacific island countries and territories that have insufficient capacity to store, treat or ship recyclable waste.

The Secretariat of the Pacific Regional Environment Programme (SPREP) has reported on progress in waste management in Pacific island countries made under the Moana Taka Partnership. Since its launch in March 2018, approximately 686 tonnes of waste have been shipped from eligible Pacific islands and territories for treatment and recycling in suitable ports in the Asia-Pacific region.

The Partnership between SPREP and the China Navigation Company (CNCo), also known as SWIRE Shipping, allows for CNCo vessels to carry, free of charge, containers of recyclable waste from eligible ports in Pacific island countries and territories that have insufficient or inappropriate landfill space to store waste, have inadequate waste treatment facilities, and lack financial capacity to ship recyclable waste.

Kosi Latu, Director General of SPREP, has described the Moana Taka Partnership as a “paddle in the right direction” towards tackling the “immense waste management challenge” in Pacific islands.

The focus of the Partnership is on non-commercial waste streams and the types of materials that are considered recyclable, including plastics, aluminum cans, waste oil, and ozone depleting substances. Twenty-one Pacific island countries and territories are eligible to participate in the scheme.

As such, the initiative forms an important contribution towards achieving SDG 12 (responsible consumption and production) and Article 10 (Disposal of Waste) of the Noumea Convention for the Protection of the Natural Resources and Environment of the South Pacific Region and Related Protocols. [Pacific Environment Portal] [SDG Knowledge Hub Story on Launch of Moana Taka Partnership] [SDG Knowledge Hub Sources] 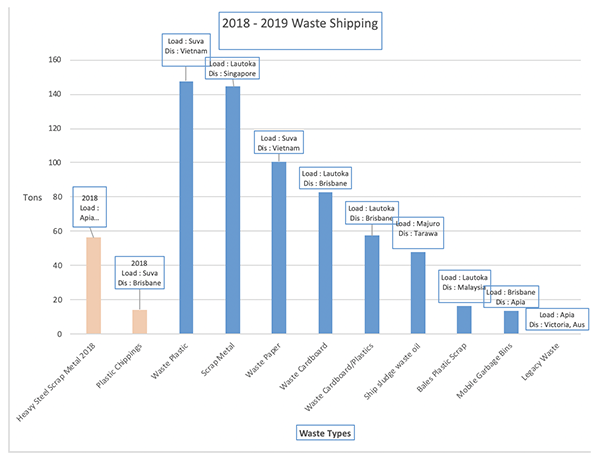