The circular economy has been posited as a means to cut resource extraction and help limit warming to 1.5-degrees.

Now, practitioners are also exploring how a circular economy with social and ethical concerns at its heart can create new jobs, ensure more equitable resource management and combat inequalities.

In this guest article, Circle Economy outlines the links between circular economy and SDGs 1, 2, 3, 5 and 10.

As it’s moved from the fringes of academia into the mainstream, the circular economy has been posited as a means to address ecological breakdown by cutting resource extraction and limiting warming to 1.5-degrees. Now, practitioners are also exploring how a circular economy with social and ethical concerns at its heart can create new jobs, ensure more equitable resource management and combat inequalities.

A transformational shift, circularity describes a system where waste is designed out, materials’ value is preserved at the highest level possible and natural systems are regenerated. A more holistic approach to circularity could pave the way to a better and more inclusive future for all. 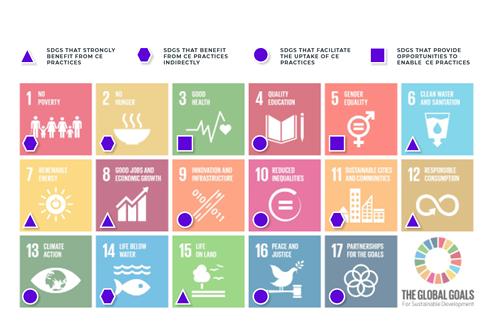 This visual depicts the ways in which circular economy strategies can contribute to various SDGs. Source: Circle Economy

Is a circular world a world without poverty and hunger?

More circular initiatives are appearing worldwide that are bettering livelihoods, spurring economic benefits and creating decent jobs. Jakarta-based non-profit XSProject, for example, collaborates with waste picker communities to create better work opportunities. The organisation buys rubbish from the waste pickers—preventing it from going to landfill—and sorts and washes it to safeguard hygiene and quality. The materials are then directly reused: community-members are hired by for-profit organisation XSProjek to manufacture a range of upcycled products, from tote bags to laptop cases.

Empowering individuals in communities can also serve the purpose of reducing world hunger. Argentina’s UN-lauded Urban Agriculture Program was launched two decades ago and is still running today, tackling both poverty and food insecurity (SDGs 1 and 2). After finding that 36% of municipal land was unused, the program equipped residents with the tools and knowledge needed to start their own sustainable, organic urban farms and gardens, transforming degraded or abandoned spaces—from strips along railways and highways or low-lying land susceptible to floods—into fruitful green spaces.

It was a resounding success: the city of Rosario saw the formation of 800 gardening groups that provided food to 40,000 residents, cutting dependence on food imports and improving food security—while also slashing greenhouse gas emissions from vegetable delivery by 95%. And now, more than 2,400 families are practising sustainable agriculture in their own household gardens.

In SDG target 3.9, governments commit that by 2030 the number of deaths and illnesses from hazardous chemicals and air, water and soil pollution and contamination will be substantially reduced. Circularity promotes choosing non-toxic, natural materials and processes that respect and strengthen ecosystems—protecting the health of water, air and soil. With our current global food systems spewing emissions, relying on growing quantities of harmful synthetic chemical additives, and increasingly damaging soil health and harming biodiversity, agriculture is a good place to start.

The type of foods we produce matter: recent research found that over 16,000 deaths occur each year from agriculture-related air pollution in the United States—80% of which are the result of meat, dairy and egg production. Animal farming has emerged as more than just a health and environmental issue: it’s also deeply linked to themes of social justice and environmental racism. North Carolina’s pig farms, for example, have reached new heights of infamy in recent years: 10% of the state’s population—largely low-income and African American—live within five kilometres of an industrial hog farm, which store pigs’ waste in open-air cesspools to eventually spray on fields in massive quantities. This causes severe respiratory conditions and asthma among children, and confines residents to their homes in the summer months when the stench becomes ‘unbearable’. In a circular economy, animals in agriculture have a limited role to play: a circular food system could involve some livestock, but in radically fewer numbers—just enough to give value to infertile land where growing crops wouldn’t be possible, and where effluent would be manageable.

How circularity can diminish inequalities

More equality—between genders, as outlined in SDG 5, or between and within social groups and communities, as in SDG 10—isn’t an automatic outcome of circular initiatives. However, practitioners have emphasised that the transition to circularity must not repeat the inequality-breeding practices of the linear economic model. The systematic inclusion of a gender lens in the circular economy could empower women and ensure a just transition. In India, the Philippines and Vietnam, for example, the Incubation Network launched a programme in late 2021 to advance gender equality within plastic waste management and recycling systems, which largely rely on women working in the informal sector, by offering financial assistance to get projects off the ground.

Circular initiatives can be designed with other forms of inequality in mind, too: Rotterdam-based Robedrijf connects people distant from the labour market to employers through the outsourced services they offer in the assembly, packaging and repair of products. Those hired have physical or mental disabilities and may struggle in traditional job roles. Through Robedrijf they acquire circular skills like disassembly and repair while working in a supportive environment.

Going beyond material use, the circular economy can improve on practices that emit greenhouse gases and pollute air, water and soil. If implemented in an integrated manner, it can also help shape a more just, equitable world, bringing more equal access to resources, equity among minorities and a range of safe, decent jobs. While circularity has a clear link with some SDGs—especially those in environmental or economic spheres—its connection to others also hints at enormous potential: when applied in a holistic manner, a global circular economy can drive the achievement of the SDGs.

This only emphasises the need to foster greater awareness and skills and knowledge development for the lesser known social dimensions of the circular economy: it should encompass a circular society. When designing and applying circular strategies, we should consider not just how to close loops on material resources, but also how to meet the needs of all with the resources we have.

Learn more about Circle Economy’s Circular Jobs Initiative, and its Thrive! initiative for cities, based on the Doughnut model.  Read more on its People in a circular economy page and explore the circular society in Why we need to rethink the ‘technical’ circular economy.