Assessment of progress during HLPF 2018 showed that the world is not on track to achieve access to energy and clean cooking fuels for all (SDG 7).

Annual global fossil fuel subsidies are 7.5 larger than the investment required to achieve energy access for all.

Sustainable Development Goal (SDG) 7 calls upon the global community to ensure access to affordable, reliable, sustainable and modern energy for all by 2030. The High-level Political Forum on Sustainable Development (HLPF) in New York noted progress, but also established that the world is still not on track to reach the targets on energy access, energy efficiency and renewable energies.

If we follow the current trajectory, 674 million people will be without electricity, and 2.3 billion people will still be cooking with fuels that are harmful for health in 2030, according to the UN’s review on progress towards SDG 7. Many of the people without access to modern energy are among the poorest of society. The urban-rural divide also remains important, with almost 87% of the world’s population without electricity living in rural areas.

We found four ways through which untargeted consumption subsidies for fossil fuels can lead to adverse results:

Untargeted fossil fuel subsidies are therefore a very inefficient, and often ineffective, tool to improve the affordability of modern fuels for the poorest. Using untargeted fossil fuel subsidies to reach the energy access target can be compared to using a very unwieldy, heavy and expensive hammer for the renovation of a house, instead of opening the toolbox and using the tools that are adapted for the different tasks.

Invest in People Instead of Fossil Fuels

Based on the International Energy Agency’s report titled, ‘2017 Energy Access Outlook,’ an additional investment of US$56 billion per year is required to achieve universal energy access. While this sounds like a lot of money, GSI estimates that US$425 billion was spent on subsidizing fossil fuels just in 2015 (combined estimate for production and consumption subsidies). This means that the global amount of fossil fuel subsidies is 7.5 times larger than the additional investment required to achieve universal access to electricity and clean cooking. While the exact potential for reallocation depends on which countries have subsidies and how savings can be used, given political and economic realities, there are several ways in which this could happen in practice. 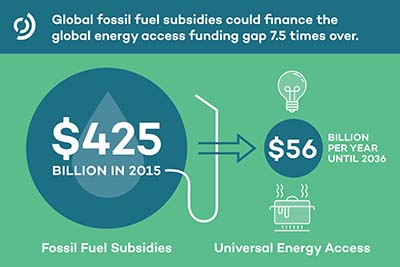 Recent statistics by the Organization for Economic Co-operation and Development show that fossil fuel subsidies cost 10 times the amount spent for energy development assistance. OECD countries supported fossil fuels with around US$82 billion annually in 2015 and 2016. A large share of these subsidies supports the production of fossil fuels and is not directly linked to energy access. In comparison, OECD countries committed US$8.3 billion annually for development assistance to the energy sector in the same period (authors’ calculation based on data collected by the OECD Development Assistance Committee). Redirecting a share of the current financing spent on supporting fossil fuels towards energy access goals could accelerate the achievement of SDG 7. 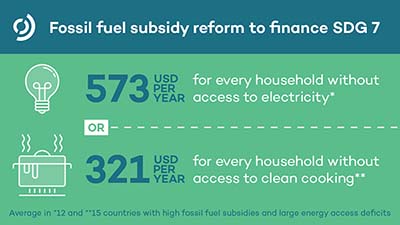 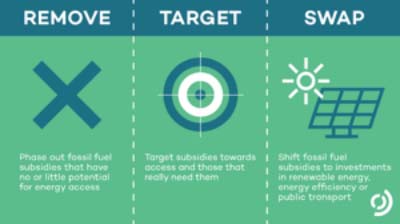 Any attempt to reform subsidies needs to be implemented extremely carefully. Just because a subsidy is inefficient or not very effective does not mean that there will be no impact on poor households if it is changed. Social protection and targeted support is necessary to mitigate the impact of higher fuel prices on poor households. 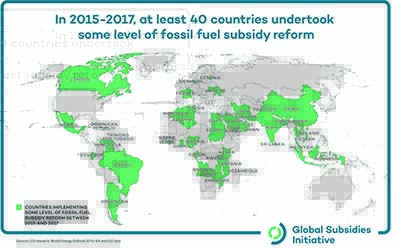 More countries should follow their example. The annual fossil fuel subsidy expenditure of US$425 billion could be better invested by governments towards SDG outcomes. This is already recognized by SDG 12, in which the UN General Assembly’s 193 members included the reform of inefficient fossil fuel subsidies as a means of implementation to achieve more sustainable consumption and production (SDG target 12.c). Subsidy savings could be invested to get on track for many development goals—not least, those on energy access. [Getting on Target: Accelerating energy access through fossil fuel reform] [IISD RS Coverage of the Side Event on Fossil Fuel Subsidy Reform] [IISD RS Video Coverage] [GSI Website] [SDG Knowledge Hub coverage of fossil fuel subsidy reform news and events]

HLPF Side Event Highlights the Potential of Fossil...