The United Arab Emirates (UAE) Ministry of International Cooperation and Development (MICAD), together with the Swiss Agency for Development and Cooperation (SDC), co-organized a side event on the margins of the 70th UN General Assembly on 'Mobilization of Additional Resources for the SDGs.' The event aimed to begin a dialogue on fresh approaches to generating funding for the implementation of the Sustainable Development Goals (SDGs) and create new partnerships for smarter and more efficient use of those funds. 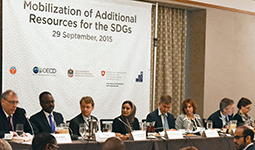 29 September 2015: The United Arab Emirates (UAE) Ministry of International Cooperation and Development (MICAD), together with the Swiss Agency for Development and Cooperation (SDC), co-organized a side event on the margins of the 70th UN General Assembly on ‘Mobilization of Additional Resources for the SDGs.’ The event aimed to begin a dialogue on fresh approaches to generating funding for the implementation of the Sustainable Development Goals (SDGs) and create new partnerships for smarter and more efficient use of those funds.

The key partners in the event were the Ministries of Foreign Affairs of Ethiopia, Sweden and the Netherlands, as well as the OECD Development Assistance Committee (OECD-DAC), the UN Capital Development Fund (UNCDF) and SwissContact.

Sheikha Lubna Bint Khalid Al Qasimi, UAE Minister of International Cooperation and Development, chaired the event and stressed the need for learning from current initiatives in both the public and private sectors, particularly in raising additional resources for the world’s poorest people and in using public funds as a catalyst, thus multiplying the impact of government funding. She proposed that Expo 2020, to be held in the UAE, can serve as a platform to take stock of progress in the financing of the SDGs. She also noted that the DAC can serve as an additional body for monitoring the use of funds for the SDGs.

Moderator Erik Solheim, OECD-DAC Chair, cited examples of leadership in implementing the SDGs that had been announced during the UN Sustainable Development Summit, which convened on 25-27 September.

Manuel Sager, SDC Director-General, spoke about ways for the public and private sector to cooperate, as is the case with SDC, which he said works with 30 private sector firms. Sager emphasized the role of corporate social responsibility, stressing that this should not be relegated to funds or foundations but part of the core of business. He also: noted that Switzerland supports the OECD and World Economic Forum (WEF) ReDesigning Development Finance Initiative; said “downsides” of working with the private sector include shifting risk from the private to the public sector and subsidizing unsound ventures; and noted that sound public finance management is key to SDC’s focus, as well as to domestic resource mobilization.

Isabella Lövin, Sweden’s Minister of International Development Cooperation, said official development assistance (ODA) is necessary and essential for ensuring that additional sources of financing can be effectively used. However, ODA is not enough, she said, and much more financing is needed to meet the SDGs. Lövin called climate change the greatest threat to sustainable development and urged strengthening the mechanisms to steer flows toward climate-friendly investments.

Ethiopia’s Minister of Finance and Economic Development, Abraham Tekeste, said mobilizing public finance is critical to sustaining development, and each country has primary responsibility for its own domestic resource mobilization. The challenge is leveraging the potential of the private sector, he noted.

The Netherlands’ Special Envoy for the SDGs, Peter van der Vliet, also stressed the importance of domestic resource mobilization. He said taxes should be used for development “where the money is made.” He said his country as negotiated bilateral tax treaties to ensure tax revenues do not leave the country of origin. The central challenge for the SDGs, said van der Vliet, is mobilizing private investment for public goals; he noted the role of the public sector in absorbing some private sector risk. For example, health insurance funds and the Dutch Good Growth funds provide loans, guarantees and insurance for Dutch businesses in developing countries.

Judith Karl, Executive Secretary of the UN Capital Investment Fund (UNCDF), said growth paths have not been inclusive, and investments need to reach the level of the local economy where resources are scarcest. It is in this “last mile” where the SDGs will be achieved. UNCDF has models to show how strong public-private partnerships (PPPs) can unlock resources at the local level, she said, adding that innovative financing models and partnerships (including through digital pathways) can expand access to formal financial services.

John Meyers, SwissContact, reiterated that increasing leverage of ODA and minimizing risk are important. He noted the role of individuals in remittances, which are three times the size of development assistance, and the need to strengthen remittance agencies. Meyers also said foundations are a major source of risk capital in developing countries, and combined with ODA are catalysts, and CSR and corporate philanthropy are also essential.

Following questions and comments from the floor, Sheikha Lubna Al Qasimi proposed creating working groups that are geared to resource mobilization to meet next year. She stressed that monitoring and evaluation should begin “from day one.” [IISD RS Sources]