Five Pacific countries have approved national State of the Environment reports in the midst of the COVID-19 pandemic, demonstrating continued commitment and attention to the importance of environmental action and environmental monitoring and reporting at the national level.

According to the Secretariat of the Pacific Regional Environment Programme, this is a record number of State of the Environment report approvals in one year.

The Cook Islands, Niue, Solomon Islands, and Tonga have approved their national State of the Environment (SoE) reports, whilst in Papua New Guinea (PNG), the Minister for Environment Conservation and Climate Change has preapproved the country’s report. The Secretariat of the Pacific Regional Environment Programme (SPREP) – the regional environment organization in the Pacific – assisted the countries in the development of the reports.

“One of SPREP’s core functions is to support our Pacific island member countries in developing their national State of Environment Reports, and working in partnership with them to implement their environment actions and decisions based on the SoE Report,” said Kosi Latu, Director General, SPREP. According to SPREP, the five SoE report approvals in one year is a milestone achievement, considering the current challenges and impacts of COVID-19. It clearly demonstrates Pacific island countries’ continued commitment and attention to the importance of environmental action, monitoring, and reporting to support informed environmental planning and decision making at the national level.

The SoE reports present an overview of the countries’ environments across seven thematic areas: Culture and Heritage; Atmosphere and Climate; Coastal and Marine; Freshwater Resources; Land; Biodiversity; and Built Environment. The reports use the Drivers, Pressures, State, Impact and Response (DPSIR) model to describe the environment, causal relationships, and environmental effects, based on quantitative data relating to the state of the environment, supplemented by stakeholder input.

The SoE reports highlight that all five countries have: decreased their import of ozone depleting substances; increased their percentage of protected areas; and increased their installation and generation of renewable energy. For instance, the 2-megawatt Matatoa Solar Farm in Tonga, commissioned in October 2017 and consisting of 7,440 solar panels, is expected to generate more than 2.8 million kilowatts of electricity during its first year of operation.

Commenting on his country’s 2019 SoE report, Haden Talagi, Director of the Department of Environment, Ministry of Natural Resources, Niue, highlighted it as “a valuable resource that allows us to conduct effective environmental planning and decision making,” helping to “bring about a bluer and greener Niue as we forge ahead to a ‘new normal.’” 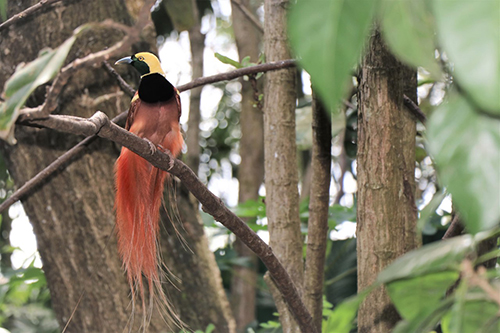 The spectacular Raggiana bird of paradise is endemic to the forests of Papua New Guinea.

Adaptation Finance Update: Green Bonds on the Rise but Will Adaptation Projects Benefit?