For the first time, researchers have identified the key combined actions needed to stop and reverse biodiversity loss on land, backed by robust futures modelling.

The post-2020 global biodiversity framework will be a critical opportunity to stop biodiversity loss and ensure that people continue to benefit from biodiversity into the future.

But for this framework to be effective, it must incorporate both bold conservation and restoration efforts, as well as food system transformation.

It’s clear that we need urgent, transformative change to tackle the global nature crisis. In many cases, we already know the solutions. How to stop terrestrial biodiversity loss from habitat conversion is one such case, and it has implications for the entire SDG framework.

Last week, the UN Convention for Biological Diversity’s (CBD) Global Biodiversity Outlook 5 reported that of the 20 Aichi targets agreed in 2010, only six are being “partially achieved” by their 2020 deadline. The CBD warns that despite encouraging progress in several areas, the natural world is suffering badly and getting worse. Launched in the same week, WWF’s Living Planet Report found that the population sizes of mammals, birds, fish, amphibians, and reptiles have seen an average drop of 68% since 1970.

How can we halt biodiversity loss from land use change while feeding a growing population?

The good news is that the scientific community has made great progress in defining the problem over the past decade; we now have a clear and robust evidence base showing the urgency of changing course. There has also been massive progress in scientifically defining what needs to be done. A prime example of this is our knowledge of how to halt and reverse terrestrial biodiversity loss from land use change.

A third recent study, published in Nature on 10 September, shows the possibility of halting and reversing terrestrial biodiversity loss caused by land use change. 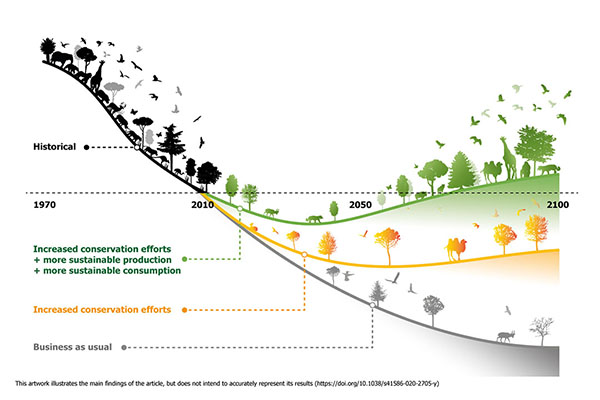 Six Actions to Halt and Recover from Terrestrial Biodiversity Loss

The new study was led by David Leclere of the International Institute for Applied Systems Analysis (IIASA) and involved 58 experts from across 46 institutions including the UN Environment Programme World Conservation Monitoring Centre (UNEP-WCMC). It projects that without further efforts to tackle habitat loss and degradation, global biodiversity decline will continue at a rate close to or greater than that for 1970-2010. Land use change, also known as habitat conversion, is one of the main drivers of biodiversity loss on land. The researchers used ground-breaking modelling and newly developed scenarios to identify six actions needed to stop such losses. These are:

By combining the six actions listed above in an integrated strategy, modelling shows that it is possible to avoid more than two thirds of future terrestrial biodiversity losses caused by land use change.

The authors of the study considered seven different scenarios to explore whether we could achieve this without undermining other SDGs. In particular, how can we halt biodiversity loss from land use change while also feeding a growing population?

Such transformative change in food and land use systems would also have valuable co-benefits that contribute to other SDGs, such as SDG 13 (climate action), SDG 6 (clean water and sanitation), and SDG 3 (good health and wellbeing).

This is the first time that the key combined actions needed to stop and reverse biodiversity loss on land have been identified and backed by robust futures modelling. This research sets out clear and ambitious actions for governments, businesses, and consumers to take on board.

What We’ll be Listening for at UNGA 76

What We’ll be Listening for at UNGA 76

Study Examines Prospects for Collaboration among B...