5 June 2017
share this
Focus on Interactions to Make the SDGs a Success: Our Key Messages for the Ocean Conference
UN Photo/Rick Bajornas
story highlights

SDGs should not be tackled in isolation given the many interactions and interdependencies across SDGs, and SDG14 is no exception.

Given the expected growth of coastal settlements and megacities, various targets under SDG14 may be compromised unless housing, settlements and infrastructure are planned and managed sustainably.

The Paris Agreement is a key hinge between SDG14 and SDG13, supporting and reinforcing the achievement of both SDGs.

Most ocean activities and ocean impacts have their source on land, whether it is shipping and fishing activities or pollution and degradation of coastal and marine habitats.

The International Council for Science launched a new report at the Multi-stakeholder Forum on Science Technology and Innovation for the SDGs (STI Forum, 15-16 May 2017, New York) titled, “A guide to SDG interactions: from science to implementation” (ICSU, 2017). The report highlights the importance of starting a conversation between science and policy on how SDGs can mutually support or may detract from one other, and the key role that integrated science and coherent policy-making have to play in the implementation of the SDGs, at both global and national level.

As the international community prepares for the UN conference to support the implementation of SDG14 on oceans, seas and marine resources, we want to stress that the success of SDG14 will rely on and contribute to achieving the SDGs as a whole. ICSU together with the Institute for Advanced Sustainability Studies, the Cluster of Excellence “The Future Ocean” in Kiel and other partners will hold a side event on 5 June 2017 in New York to present the key findings of the report and discuss next steps for making progress on meeting SDG14.

Last year, Nilsson et al. (2016) proposed a pragmatic approach to mapping SDG interactions based on a seven-point scale for scoring the level of interdependence between two goals or two targets. The scale ranges from +3, which applies when one goal or target is very reinforcing of others, to -3, which applies when goals and targets are mutually excluding. This initial framework has now been expanded into a comprehensive report that examines four goals (SDG2, SDG3, SDG7, and SDG14) in more detail, along with their underlying 36 targets.

The report includes a broad assessment of SDG14 interactions with all other 16 SDGs as well as an in-depth analysis of interactions with the SDGs targeting poverty (SDG1) and hunger (SDG2), sustainable economic growth (SDG8), cities and communities (SDG11), consumption and production (SDG12), and climate change action (SDG13). From this assessment (Schmidt et al., 2017), which includes regional case studies and policy examples, the following key recommendations can be drawn for the implementation of SDG14 within the broader SDG framework:

Interactions should not become another buzzword to hide behind but a concrete tool for defining win-win strategies for achieving the SDGs. Understanding and tackling the systemic character of the 2030 Agenda and the 17 SDGs is key to achieving SDG14 and strengthening global and regional ocean governance. 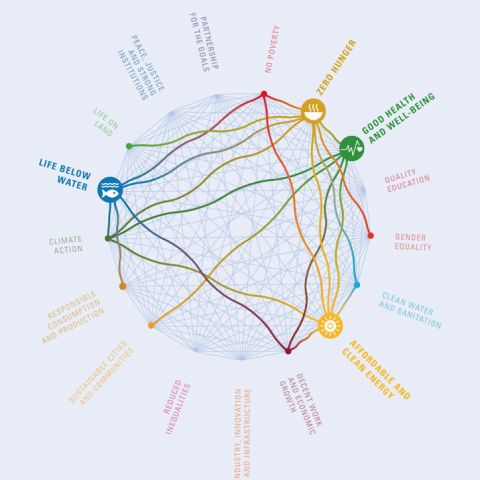 Fig. : SDG interactions analyzed in-depth in the ICSU report (ICSU, 2017) using a seven-point rating scale and based on reviews of scientific findings and expert knowledge.