We are approaching a watershed – the end of the period in which the Aichi Biodiversity Targets were to be implemented, and a global summit to map out a strategy for the coming ten years and beyond.

Only a genuine and large-scale mobilization of stakeholders will create the conditions under which the more courageous politicians will feel they can take the risk of genuine leadership.

This mobilization must build around a new narrative for conservation, and we must also harness the best innovations in other fields, from technology to social mobilization, financial instrument design, and behavioural science.

They say a picture is worth a thousand words. The graph below, which contrasts media coverage of Climate Change (CC) with that of Biodiversity (BD) over the past 30 years, lays out at a glance one of the central paradoxes of sustainable development. Climate change has captured the public imagination. There can be few people who are not exposed to the daily stream of messages of fear and of hope; most have a settled opinion about the threat that it represents or tactics for addressing it. Yet biodiversity conservation, representing an equal (and, indeed, closely linked) threat to life on the planet, flies mostly well below the radar. Despite the rapidly developing base of knowledge on the threat that loss of biodiversity represents, despite the stream of reports that track the bleak trends, public debate has flat-lined over the past three decades as the situation continues to accelerate towards the abyss. 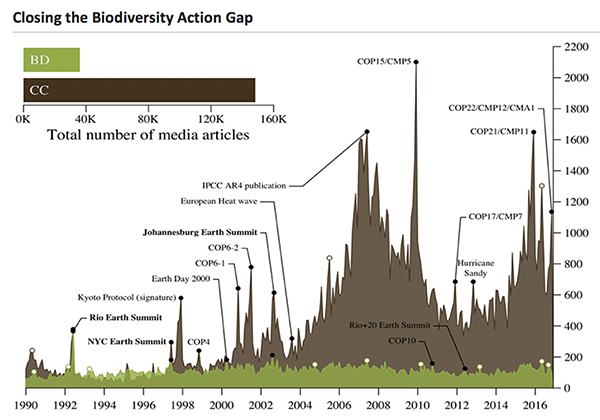 Some factors help to explain this situation. The impacts of climate change are palpable and widespread – the occurrence of ever more frequent extreme climate events, the shrinking of glaciers, the recurring droughts and heat-waves – all provide evidence that climate patterns are changing. Whether or not a single event can be traced to the changing climate, most people are increasingly inclined to believe that the climate is changing and that the impact of this change is beginning to bite. By contrast, most biodiversity loss is invisible, or detectable only to those specifically looking for it. It is well known in ornithological circles that the first appearance of a new species is big news, whereas the disappearance of the last specimen of a species, even if it was once common, will escape notice for a long time. We know that tropical forests are disappearing, that coral reefs are dying, but what we tend to see out our windows is still much like it was when we were children.

Also, if a significant part of the climate challenge can be addressed through technology – cleaner production, energy efficiency, renewables, electric cars, etc. – there is no such obvious fix to ensure maintenance of ecosystem resilience or the continued availability of ecological services. Though the most technologically optimistic will claim that we can create – or recreate – the species we need through genetic engineering, natural systems are so complex and interconnected that it would be foolish to place one’s faith in technology alone.

Sadly, intergovernmental effort to stem biodiversity loss mirrors the above graph when compared with what has been achieved in the climate negotiations. Since the Convention on Biological Diversity (CBD) was adopted in 1992, endless strategies, action plans, roadmaps, goals and targets have been adopted, but action to deliver on what has been promised has consistently fallen short. We are again approaching a watershed – the end of the period in which the Aichi Biodiversity Targets were to be implemented, and a global summit to map out a strategy for the coming ten years and beyond. While many earnestly hope that this will be a new “Paris moment” when the stakeholder communities came together and a global climate agreement was adopted, it increasingly looks as if this could be wishful thinking. None of the signs of what created the magic formula in Paris in December 2015 appear to be present.

On 20 September 2018, in Paris, the Institute for Sustainable Development and International Relations (IDDRI from its title in French) held a public meeting to consider this dilemma, seeking to identify some of the features that could lead to a serious shift in the political attention towards genuine action for biodiversity conservation. I was invited to present ideas on what it would take to break out of the depressing cycle of hope and disappointment and genuinely begin turning the ship around. My advice was as follows:

None of this is to suggest that we abandon our efforts through mechanisms like the CBD or Convention on International Trade in Endangered Species of Wild Fauna and Flora (CITES). On the contrary, they are necessary and merit strong support. Instead, it seeks ways to generate the political will that is too often missing in those processes and to give nature a chance of winning for a change.

Living in Harmony with Nature to Transform Our World: The CBD’s Contribution to SDG Implementation (Part II)

Living in Harmony with Nature to Transform Our Wor...