The CITES capacity building programme offers support to developing country Parties to sustainably manage and conserve their wildlife based on solid scientific information and legal requirements.

This article highlights the outcomes of projects supported by the European Union, and in particular through the partnership of UNEP and the European Commission (EC) under the ENRTP-GPGC Cooperation Agreement.

Recipient countries, the donors and the Secretariat work together to enable all Parties to meet their international obligations under CITES, and this allows them to participate in the global economy while meeting other international commitments such as the SDGs.

Nature is in decline because of human activities – this was a main message of the first ‘Global Assessment of the State of Biodiversity and Ecosystem Services’ published in May 2019 by the Intergovernmental Science-Policy Platform on Biodiversity and Ecosystem Services (IPBES). The report highlights the crux of sustainable development – how can we grow prosperous societies without eroding the natural resources that underpin global wellbeing?

CITES – the Convention on Trade in Endangered Species of Wild Fauna and Flora – has been operating at this nexus of conservation, trade and development for almost forty-five years. The Convention does so by offering 183 country Parties a mechanism through which they can balance trade in biodiversity with its conservation. CITES regulates trade for some 36,000 species of wild animals and plants as well as the products derived from them – everything from watch straps to dried herbs and furniture to the elephants at zoos and safari parks.

CITES’ purview is vast and growing. At its most recent (August 2019) Conference of the Parties (CoP18 or the triennial World Wildlife Conference), Parties to the Convention updated the trade rules for dozens of species to ensure their survival in the wild. CoP18 also made 357 decisions proposing new actions on the implementation and further development of the policies and regulation of international trade in wild fauna and flora. Further, delegates to the Conference adopted the CITES Strategic Vision 2021-2030, positioning the Convention as a tool that can support progress towards the 2030 Agenda, as well as the post-2020 biodiversity framework, once it is finalized next year under the auspices of the Convention on Biological Diversity (CBD).

To help reach the Sustainable Development Goals (SDGs) and related biodiversity targets and stem the crises highlighted by IPBES, CITES strives to balance the use and conservation of biodiversity. But how to strike this delicate balance – as crises mount and as the CITES agenda continues to grow – is an urgent question. How can we support 183 countries to regulate trade in specimens of animals and plants, and do so in a way that is not only consistent but also supportive of their broader development ambitions?

The answer is, in part, through donor-funded capacity building.

The CITES capacity building programme offers support to developing country Parties, especially those that lack the necessary resources to comply with the basic requirements of the Convention, to sustainably manage and conserve their wildlife based on solid scientific information and legal requirements. The capacity building programme empowers countries to better manage their biodiversity, benefit from their ecosystem services, and take responsibility as full members of the global economy. With regard to the SDGs, capacity building helps countries link the conservation-oriented targets laid out in SDGs 14 (life below water) and 15 (life on land) – with social and economic targets under, for instance, SDGs 1 (no poverty), 8 (decent work and economic growth), 11 (sustainable cities and communities) and 12 (responsible consumption and production).

For the last decade, various donors have financed CITES’ capacity building activities, and their support through the Secretariat has provided a number of benefits. First, it has promoted transparency and impact: the Secretariat, by mandate, uses donor funds to support Parties in their efforts to implement the Convention in accordance with the decisions and recommendations of the Parties. Second, it has strengthened the neutrality of the funded activities: the Secretariat must consider the needs and concerns expressed by all developing countries that are beneficiaries of its capacity building efforts, taking into account donor priorities and Parties’ decisions, ensuring that no one is left behind.

The Example of the ENRTP-GPGC Cooperation Agreement

In this article we highlight the outcomes of projects supported by the European Union (EU), and in particular through the partnership of UNEP and the European Commission (EC) under the ENRTP-GPGC Cooperation Agreement, which CITES takes part of as one of the UNEP-administered Multilateral Environmental Agreements (MEA).

The EU has been the largest contributor of CITES extrabudgetary support, focusing on different areas, such as sustainable wildlife management and non-detrimental trade (2009-2013); marine species and captive-bred and ranched specimens (2013-2015 and 2016-2019); and a synergistic approach for CoP preparations (2015-2016). This support has strengthened the ability of developing countries to both prepare for and implement CITES listings and decisions over the years. 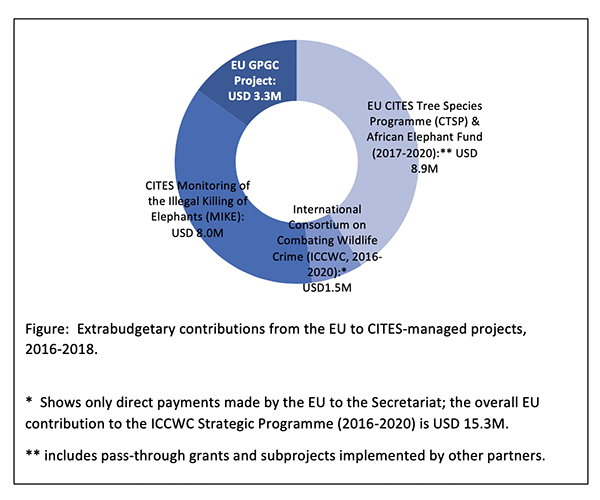 The Example of Sharks, Rays and Eels

Capacity building support with a focus on marine species has been critical in recent years. This has especially been the case as a growing number of commercially-significant aquatic species have been listed under CITES; a reality that poses both challenges and opportunities for Parties.

Under the ENRTP-GPGC Cooperation Agreement, the EU funding has provided for the implementation of CITES listings of sharks and rays since CITES CoP16 (Bangkok, 2013) when four species of sharks and manta rays were added to CITES Appendix II.  The funding contributed to activities such as the collection of shark landing data, which formed a baseline for countries to assess the sustainability of their trade. Previously, such data for fisheries bycatch, including sharks, were scarce for most developing countries.

The support from the EU was also crucial to the establishment of a working partnership with the Fisheries and Aquaculture Department of the Food and Agricultural Organization of the UN (FAO), which allowed CITES to reach the fisheries community and collaborate with Regional Fisheries Management Organizations and Regional Fisheries Bodies. CITES was thus able to bring in the relevant expertise in the field of fisheries, ensuring that the fundamental conditions of legality, sustainability and traceability were fully understood and remained relevant in the area of commercially-exploited marine species.

Another example comes from the effort to bring the national laws of developing country Parties in compliance with the Convention’s requirements. The EU funding, along with other bilateral donors, allowed the Secretariat to review draft legislation for more than 45 Parties and provide technical assistance to the legislative efforts of a dozen countries in the last 36 months. The Secretariat was also able to convene sub-regional workshops on national legislation for West Africa and Central Asia – in collaboration with the United Nations Environment Programme and other partners. This allowed Parties to work towards ensuring that the primary mechanism for their national efforts in regulating legal and sustainable trade were in place, in the form of national laws and regulations.

There are many other instances where the EU has provided long-term support to the work of CITES, including its collaboration with other relevant bodies. It has, inter alia, helped provide critical data on elephant populations through the CITES Monitoring the Illegal Killing of Elephants programme (MIKE) since 1999, and on commercially-significant tree species through the CITES Tree Species Programme (formerly ITTO-CITES implementation for tree species), since 2006.  More recently, the EU has become a main donor for the International Consortium to Combat Wildlife Crime (ICCWC) – a collaborative effort of five intergovernmental organizations including the CITES Secretariat to bring coordinated support to wildlife law enforcement agencies at national and regional levels.

The take-away message is that recipient countries, the donors and the Secretariat work together to enable all Parties to meet their international obligations under CITES, and this allows them to participate in the global economy while meeting other international commitments such as the SDGs. CITES will continue its capacity building programme and work towards a future where biodiversity is sustainably managed, and if our goals are met – both species and livelihoods are upheld.

Monthly Forecast August 2019: Protecting Our Planet Through Climate Finance and by Preserving Biodiversity and the Oceans